After a successfully funded campaign for their Arcano MIDI NES Chiptune Synthesizer, Arcano Systems now has another Kickstarter project for Obscura, an Arduino-compatible 8-bit chiptune synth. 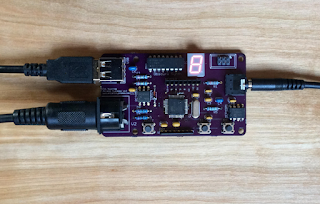 The Obscura seems to be a custom board based upon an Arduino Leonardo. While they say “Arduino pins 5, 8, 9, 10, 12, and 13 are broken out for hardware hacking and experimentation”, I asked whether the Obscura is Open Source and here is their response:

“Currently, the Obscura is not open source and I have no immediate plans to release PCB CAD files or full source code; however, that may change in the future.

I am currently developing a simpler version of the code with detailed comments to release to backers to illustrate how to read and process MIDI data and generate an audio signal using wavetable synthesis. This simpler version is meant to be a starting point or reference for users who want to develop their own custom synth software and patches.”

The Obscura comes with 16 patches, but from the response above, it seems this may be able to be changed by the user (via some programming) in the future. Here are the factory presets:

From the demo video below, it seems to have a pretty good sound. The $95 pledges are gone, but at this time there are still a few $100 pledges left, and their goal of $2,000 is almost met with 29 days still to go. Here is the official Kickstarter page: Obscura MIDI 8-bit NES & C64 Chiptune Synthesizer