A first look at the Soulsby Synthesizers miniAtmegatron. 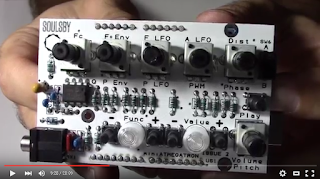 The Soulsby Synthesizers miniAtmegatron was launched yesterday, and I recorded a video showing the unboxing, assembly, and a quick demo of the unit (video below).

The miniAtmegatron is an Arduino compatible shield in kit form. All the parts for the shield were included, along with some (very) basic instructions. Here are some quick thoughts on the assembly of the miniAtmegatron:

After assembly, download the miniAtmegtron source code and libraries from the Soulsby website. Extract the libraries (not just the Library 2-0 folder) into your Arduino Library folder (DocumentsArduinoLibraries)
Start the Arduino IDE, open the miniAtmegatron source code (sketch), and upload to the Uno. Install the miniAtmegatron shield onto the Uno (I used some small machine screws to keep it in place), plug your audio cable into the miniAtmegatron and whatever speakers/audio system you will be using, and you should be up and running.
Beyond this point, there doesn’t seem to be much on the way of instructions (as of today) beyond the “cheat sheet” on the back of the part’s list, and the screen-printed labels on the PCB. You can watch my brief explanation of the controls towards the end of the video below (they’re similar in theory to the full Atmegatron).
It sounds pretty great for such an inexpensive item. Once there’s some info on MIDI control and other items, I hope to post another video explaining the operational aspects of the miniAtmegatron in more detail.

At $39, it seems like a no-brainer if you’re into this type of sound. What do you think? Let me know in the comments below.

Update: See the new case for the miniAtmegatron here.