Home » Atmegatron, the open source, 8bit, Arduino based mono synth & drum machine is updated to V2 and a mini kit!

Soulsby Synthesizers is back with an update to their Atmegatron line, and a new kit. 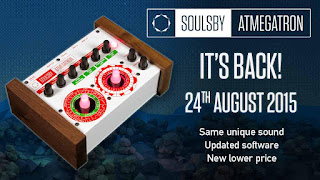 Paul Soulsby has announced an updated version of his Atmegatron, due out August 24, 2015. The new Version 2 has the the same unique sound, but with many more software profiles for download, and a lower price. Even more exciting is the announcement of an Ardruino compatible miniAtmegatron shield in kit form, at a very affordable price (TBA). 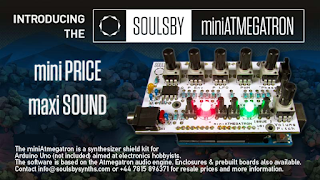 I previously wrote about the launch of the Atmegatron in this post (sound examples at the bottom), and I’ll be receiving one of the miniAtmagatrons soon for review. It sounds like both had great reception at the Noise Kitchen Synth Fest.

UPDATE: I received a miniAtmegatron and have a post with video of the unboxing, assembly and quick demo of it’s sounds here.

There’s many new features, including prices, to be released soon. Information is slowly making it’s way to the Soulsby Synthesizer website. However, I’ll stay on top of the info and post it here.

What do you think? Will a lower price, more features and even a mini version in kit form entice you to buy one? Let me know in the comments below.