Home » Displaying animations on an oscilloscope from sound waves; and a Kickstarter audio/visual album.

Can you create animations on an oscilloscope from sound waves? 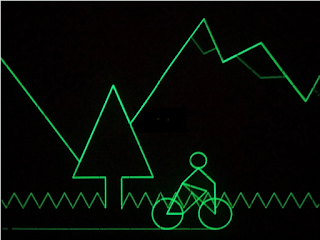 I had been looking for something like this to display a clock or other graphics on my oscilloscope. During my research I stumbled across some YouTube videos of people doing the same thing, only some of these people were taking the concept to a new level.

Jerobeam Fenderson‘s videos were the most advanced that I came across. He has even performed live with his rig of test equipment and custom software. He is truly making art, both video and audio. To the point he’s launched a Kickstarter campaign to release an audio/visual album of his oscilloscope work.

In the comments of some of his videos, some people were doubting the validity of his claims of being able to make such complicated displays with just sound waves. While I knew it was possible, I was still curious. So I hooked up my laptop’s audio outputs to the X/Y inputs of my old BK Precision 2120 scope, and here’s what happened: