So, I’ve finally gotten around to picking up an Arduino to play around with. I’ve owned a couple books on programming/interfacing them for a while now, just to see if it would be something I would be interested in. So I finally took the plunge and bought a Mega 2560.
I have a black-box SDR (software defined radio) that I would like to control without a typical computer, and I think the Arduino should fit the bill.
However, I didn’t like just having the Arduino “out in the open”, I wanted to protect it a little, give myself a semi-permanent breadboard prototyping area, and be able to take it to work easily to work on it in my downtime. So I came up with this: 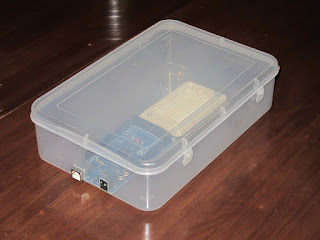 It’s just a cheap clear plastic box! It should give a somewhat safe/stable area to prototype, with room for my large hands, and some extra components, wires, etc. I cut out holes for the USB and power connections. This also acts as a “mounting point” for the Arduino. You could even mount some buttons, switches, pots/encoders, etc. in the lid or side. 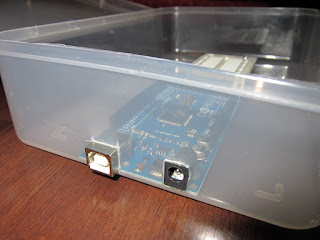 I drilled a couple holes in the bottom of the box and used machine screws/nuts (and a dab of hot glue on each) to secure the two boards. Now I’m ready to play! 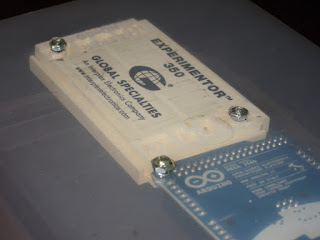