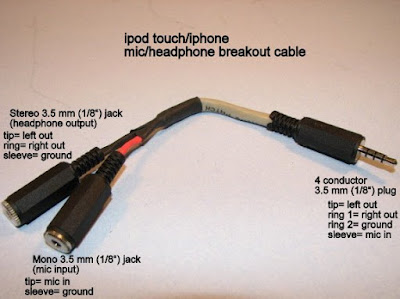 (update) I inadvertently said I got the 4 conductor plug at Jameco – it was Mouser, and is listed correctly, with the part number in the blog.

Have you ever wanted to plug in a professional studio mic to your iPod touch/iPhone? There may be a commercial solution, but I couldn’t find one. Even if there is one, I figured I could build one cheaper than a ready-made one. You could also use this for a line-in (my original reason for the project), but the source really needs to be taken down to mic level from line level for good sound quality.

The hardest part was finding the 3.5 mm 4 conductor plug (found it at Mouser, #171-7435-EX). The soldering to the plug was a bit tricky too. I needed a cable with at least 4 conductors inside, and I wanted to build this for next-to-nothing, so I used some CAT5 ethernet cable I had. CAT5 has 8 conductors, so if you know of any other common cable with at least 4, you can use that.

***UPDATE: Thanks to PTM for pointing out the iPod/iPhone’s audio input is meant for an electret mic. Therefore, there is 2.7 v across the input. However, there is only a tiny bit of current. If this concerns you and you want to get in the habit of doing it the right way, you should put a 1 – 10 uF cap like this one in-line to block the dc. If you don’t know how or want to do this, the current probably won’t do any damage, but be warned.***

The sound quality with a Shure SM58 plugged into the iPod touch was way better than a very good pair of Shure earbuds/mic. When you look at the files in Sound Forge etc., the noise floor was about -60dB with the SM58 and about -50dB with the earbuds. The SM58 had way more dynamic range and obviously less background noise too. Not that surprising, since it’s a professional mic, but more proves that for serious recording, this is well worth doing.

The earbuds/mic aren’t terrible. It’s more a question of “how good” do you need to get? On a pair of normal home computer speakers, there may not be as much of a difference, but I’m listening through a $1400 pair of Event studio monitors.

Here are the sound files to compare. They were recorded with the free Griffin iTalk app at 44.1k and file transferred directly via wifi :